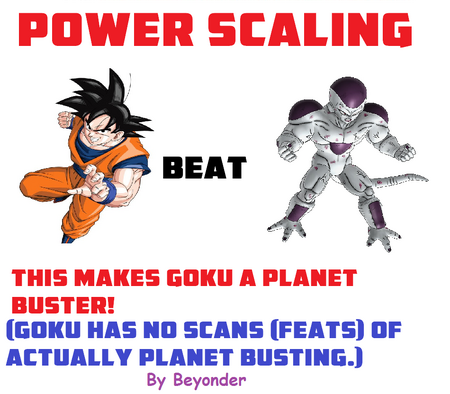 EXPLANATION: WHY WE DON'T USE SCALING!

Firstly we here at FBO are falsely slandered by numerous biased sources because we don't accept scaling on our profiles and so by their "logic" and their "opinion" we are Lowballing/Downplaying/Biased toward characters and places secondly this is not true and a TOTAL lie told by our numerous amount of haters who don't even know about us! I will explain WHY we don't use it and instead prefer using actual feats, official sources (Handbooks/Databooks), and actual author confirmation so actually read before judging us because you don't like facts! We don't use or accept scaling because of the majority fictional series DO NOT APPLY or go by this "Next person will be stronger" bs and most people don't want to include the fact that inconstancies will debunk/refute the concept of power scaling can get people to be ignorant of what they can't accept.

Our other issues are that Comics, Video Games, Novels, TV shows, and a majority of Anime DO NOT follow this concept at all! it's not about us liking or disliking a series! it's about being fair and logical to all characters! even if we have to do research to get the right stats! We look at all stats no matter what it is!

What we also want people to read is this link as well: Why Powerscaling is BS.

Power scaling is a debating method used on public forums where it gives a approximation (power boost) of a certain amount of few selected character's of a series mostly Dragon Ball Z and people who debate with this method use this as a excuse to claim a certain characters (fake) capacity this method is used as an illogical method by FBO due to the fact many fans can up play and downplay a character and or series as by fans it has to be consistent with its characters. Even when the DBZ series is heavily inconsistent.

Why Is This Illogical?

Powerscaling, in general, is pure excuse to overpower a character that doesn't actually have the scans to the speculation and hyperbole and is an excuse not to post scans of the character(s).

Retrieved from "https://fictional-battle-omniverse.fandom.com/wiki/Powerscaling?oldid=28295"
Community content is available under CC-BY-SA unless otherwise noted.